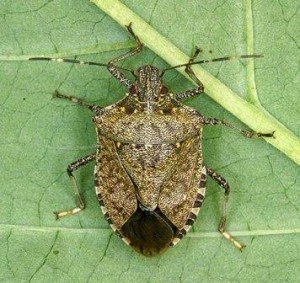 Most people have noticed increased populations of Halyomorpha halys, commonly known as the Brown Marmorated Stink Bug (BMSB), which was identified in Maryland in 2002. The pest, native to Asia, was introduced into the United States via trade goods shipments, and has rapidly spread through the East Coast and westward, mostly through transportation carriers.

The BMSB tends to seek warm shelter in houses in the fall and, therefore, caulking and sealing cracks, weather stripping, and otherwise eliminating entry points, are the best defense there. They tend to settle on sunny south-facing light colored house siding. If large numbers are found and removal is desired, it is suggested that they be vacuumed with a shop vac and deposited in the trash outside. Note – squashing them can produce a strong odor. Insecticides are not recommended for health reasons and questionable effectiveness.

Damage in the Garden

Stink bugs can feed on numerous ornamental plants, with the adults causing major tissue damage by deep feeding. The young “nymphs” (very tiny, like small ticks or spiders) feed less deeply. There is more concern about damage to edible crops. In the residential setting, you might find tomatoes decimated. To protect plants, the bugs can be hand picked off or knocked into a container of soapy water – as is done with Japanese beetles.

Research is ongoing. Regarding plants, for example, new tomato plant varieties said to be relatively resistant, have appeared on the market. Early ripening and shorter varieties are also said to fare better. Scientific studies for control options are ongoing.

Because the BMSB was introduced into this country without its natural enemies, there are no natural control mechanisms available, that keep many other pests managed. Hence, biological control options are the best bet for long-term management. Last year, stink bug traps became widely available. Similar to bee traps, these look like narrow cylinder-shaped lanterns that are hung in affected areas in a way to capture as many bugs as possible via ‘attractant’ material that is inserted.

I have hung these on low tree branches touching deck rails (which they crawl up from the ground to reach the trap), and they have been very effective. The trap fills up with bugs    (which have no escape route) and can be periodically dumped out. The same traps can be adapted for indoor use in the winter by inserting a small light accessory in lieu of the chemical attractant. This year’s mild winter seems to have ameliorated the indoor infestations somewhat, but the expectation is that the problem will grow.