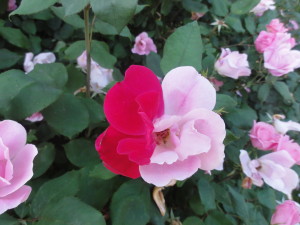 Knock Out roses have been the sensation for many years now due to their repeat flowering from spring through fall, and their supposed resistance to some of the diseases that typically plague roses.  I’ve been growing the light pink (‘blushing’) version for years, and often will see one or more flowers appearing in a different color — namely red (‘Radrazz’), which is the original Knock Out color.  I simply pluck out those deviations.  Recently, I’ve seen individual blossoms that contain the two colors — half and half — and this is quite a distinction, so I’ve let such aberrations just be. 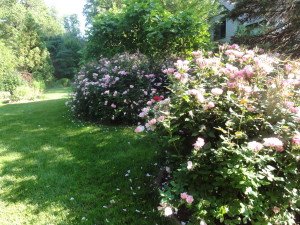 Blushing Knock Out Rose in May

If deer are not an issue (deer do go after roses), then the Knock Out roses are a nice addition to the landscape.  They can be integrated into perennial borders, placed along the foundation, used in pairs to flank an entryway or path, as a hedge/frame for garden elements, or used as specimens.  Groupings make quite a show.  They are advertised to be a modest size (3-4′ tall); however, I’ve seen them stretch up to 5′ and above, even with severe cutting back early in the season (pruning in late winter is recommended to promote vigorous new growth, and keep them in bounds).  They thrive in full sun, but will tolerate some afternoon shade particularly in hot areas.

Be forewarned — this rose has not turned out to be as trouble-free as initially thought.  It is susceptible to many of the disease and insect problems that afflict roses generally.  These pest problems include:  Rose rosette disease (an eriophyid mite found on multifloral roses that can spread the virus to Knock Outs when active from May to September); Japanese beetles; ‘rose slug’ or sawfly larvae which feed on undersides of leaves and leave small holes (they look like tiny green catepillars); and the ubiquitous black spot fungal disease.  Therefore, it is important to monitor the plants for any signs of trouble and treat accordingly.  This is one plant that may call for a ‘rose care’ feeding and insect control product as a preventative.  By the way, while this is a deciduous plant, it often holds its foliage nearly through the winter.

Meanwhile, enjoy the multi-season floral display of this shrub, and perhaps find a new flower color among your collection too.