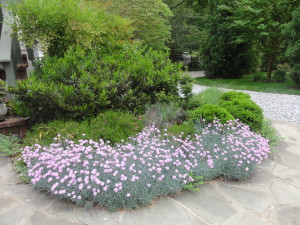 Every day in June brings out new blooms.  Here is a selection of flowering plants blooming in the color pink in early June in Maryland. The light pink mass of carnation-like blooms held above powder-blue grass-like foliage, which happens to be evergreen, is Dianthus gratianopolitanus ‘Mountain Mist’, otherwise known as Cheddar Pinks (‘pinks’ for the pinking sheared look of the carnation-like flowers).   Other nice views of this flower, which will bloom repeatedly if deadheaded, include:  a close up of the flowers; a darker or hot pink selection ‘Neon Pink’; another excellent light pink ‘Bath’s Pink’. 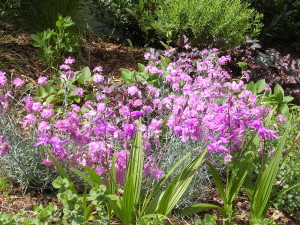 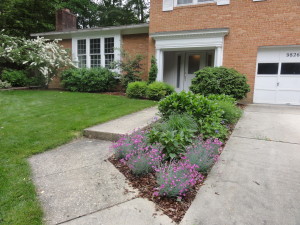 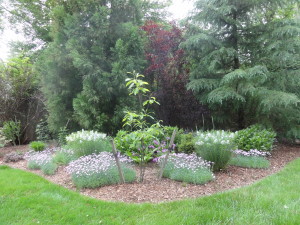 A very pale pink, actually almost lavender, the lilacs are in bloom — here is Syringa patula ‘Miss Kim’, typically topping out at under 6 feet tall, making it useful in the mixed border, or in this case, right along the front walkway to the house, 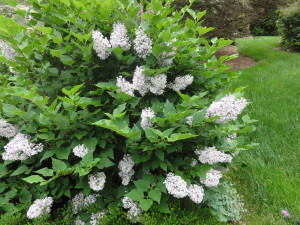 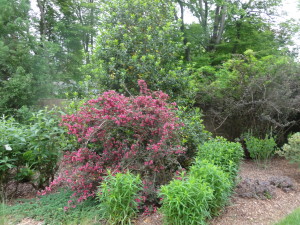 Weigela ‘Wine and Roses’ is a prolific flowering shrub, whose very deep rose blooms are set nicely against the wine-colored leaves, which themselves contrast nicely against green foliage during periods when this shrub is not in bloom.

Bletilla striata (Hardy Orchid) contains delicate hot pink flowers high on stems above the long strong strapy leaves, which also contrast nicely with delicate foliage of other plants when this one is not in flower.  The photo shows some pale pink Peony plants peeking out in the background. 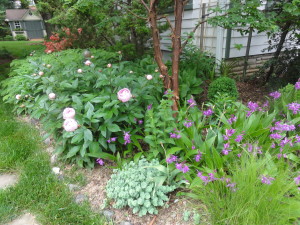 Bletilla striata (Hardy Orchid) on the right with Peony peeking out on the left. 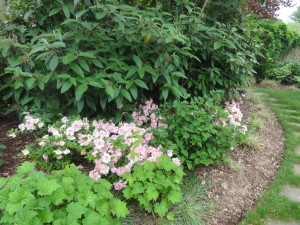 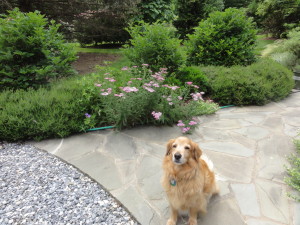 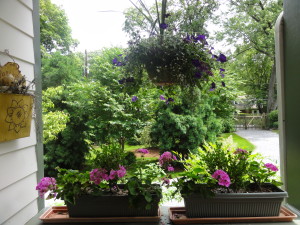 Geraniums are the old stand-by for reliable summer-long color

The Rhododendron x ‘Nancy of Robin Hill’ (Nancy Azalea), top right,  sports luscious large pale pink flowers blooming later than many azaleas, and often repeats blooming later in the season.  This is a great evergreen shrub for the mixed border or foundation where something to fit under low lying windows is needed (it is typically 2′ tall by 3′ wide).  Here, it is a nice facer plant for the Leatherleaf Viburnum (its small leaves make a nice foliage contrast), and it’s foliage also is a great contrast against the large, and lighter green, leaves of the Autumn Bride Heuchera in front of it. Top left, the pooch is sitting in front of Achillea ‘Oertel’s Rose’, a long-blooming Yarrow that flowers in various shades of pink from June to September, and is set in nice ferny light green foliage.  To the right, geraniums sit in flower boxes and will supply reliable color well into the late fall. 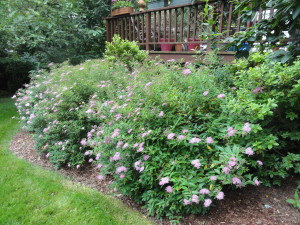 Finally, the Spireas are coming into blooms that will be with us for months.  This one is ‘Shirobana’, a shorter version, that flowers in white, pink, and red on the same plant.  Spireas are very useful for long-season flowers in areas where roses cannot be used because of deer issues.  They tend to leave the Spireas alone.