Snow in May? No, Just White Flowering Plants 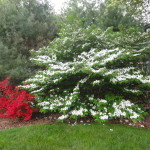 May of 2013 brought some very strange weather — sometimes temperatures fluctuating by 30 or 40  degrees within 24 hour periods.  Heat in the morning; air conditioning in the afternoon.  New plants in bloom each day, and the sometimes frigid nighttime temperatures,  made one think of snow.  Pictured here are some trees and shrubs covered with white blooms this May that are reminiscent of snow gracing the branches.  The Viburnum plicatum var. tomentosum ‘Mariesii’, pictured to the left,  is one of the most striking examples of the layered effect that appears snow-covered.

The Kousa Dogwood (Cornus kousa) is a wonderful tree if year-round interest is sought.  The white blooms gracing the lateral branches are followed by very large red berries danging from the tree’s stems.  Best to limb up this specimen to amply highlight the outstanding colorful exfoliating bark that makes this tree a standout in the winter.  For something more modest, perhaps closer to the house, the native Chionanthus virginicus or White Fringetree (tree-form or multi-stemmed large shrub) is a gem, with its unique ‘fringelike’ blossums set against the bright light green foliage.  Deutzia gracilis ‘Chardonnay Pearls’ is one of the most prolific white bloomers in the spring, as it first sports little ‘pearls’ for some time before they burst out into tiny white flowers covering the stems like waterfalls.  As the flowers fade, the colorful yellow to chartreuse foliage makes this shrub a nice contrast to darker green leafed plants.

The Pyracantha  is also covered with tiny white flowers in May.  The plant, aptly termed ‘Firethorn’ is a good security option up against the house, and it has lingering interest, e.g., when covered with brilliant firey berries later in the season. 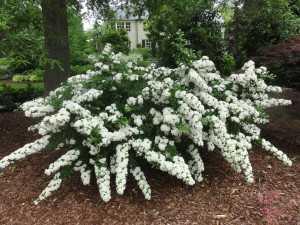 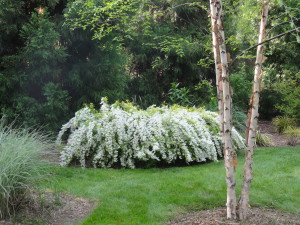 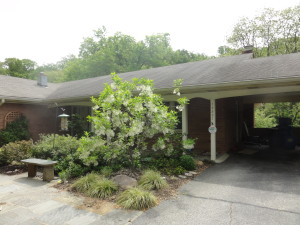 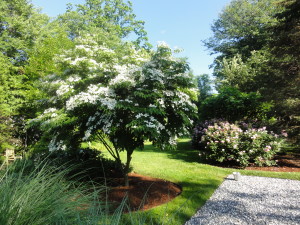